Comparison of Dagger Vs Knife - What are the Main Difference?

Fact Checked By Luna L. Rusk | Last Updated on December 20, 2020
As an Amazon Associate I earn from qualifying purchases.

Have you ever wondered about the differences between a dagger and a knife? They look pretty similar both in uses and structure. Then what makes these two tools so different from one another?

Once, I argued with my grandfather about how daggers are entirely identical to knives, and he let me win that argument. However, I could not be more wrong!

If you examine closely, you will observe that they differ in many ways. The obvious one is that a dagger has a thin, double-bevel blade. A knife, on the other hand, has an unsharpened side and a thick blade.

Since there are a few hidden features that differ dagger and knife from one another, we have put up a comparison between them to ease your shopping. Check out the dagger vs knife comparison table if you are in a hurry!

Comparison Table Between Dagger and Knife

The invention of the knife happened during the period of stone age. It was more than two million years ago. Back then, people used knives both as a weapon and a tool. Knives are standard household tools nowadays.

Usually made of metal, the blade is used in cooking, scouting, camping, hunting, and hiking.  There are hundreds of variations of modern knives, each specific to a particular use.

For example, you cannot use a butter-knife on anything other than spreading butter on your bread. Then again, unlike a butter-knife, a pocket-knife has several uses-from opening packaging to cutting twigs, slicing fruits, or even as a self-defense weapon. 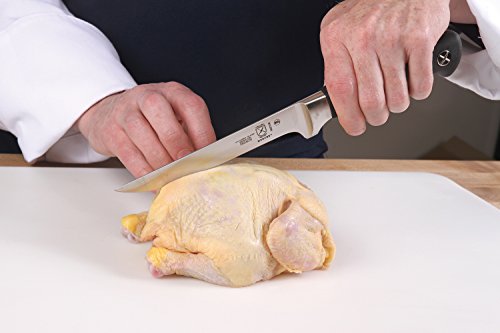 Typically, most of the knives have blades with a sharp edge and broad base. The knives are manufactured to be less harmful than daggers! A knife can do the least damage as for a tool with sharp edges.

Originally made of wood, bone, and stone, to improve their durability, blades are now made from bronze, iron, copper, steel, titanium, and ceramic. Among all the metals, steel is widely used.

Different knives have differing handles, depending on how the grip should be. Like a carving knife generally has a wooden handle, as it is proving a good grip. Handles can be made of rubber, plastic leather, and stainless steel.

Knives Out
Buy on Amazon
Bestseller No. 2

Knives Out (4K UHD)
Buy on Amazon
Bestseller No. 3

Contrary to knife production, daggers are mainly manufactured for combat. The blades are dual-bevel and relatively thin, along with a pointy end. The sharp end is designed to penetrate a target quickly. They are mostly used for thrusting or stabbing people or animals.

Daggers are comparatively heavier than knives. A heavy weapon exerts more force to inflict damage upon the victim. As dropping your weapon in combat can lead to mortal danger, the grip must be firm. So, they are designed as such that they can be held in either hand. Most daggers have a hilt that the assailant grasps to prevent self-inflicted injuries. 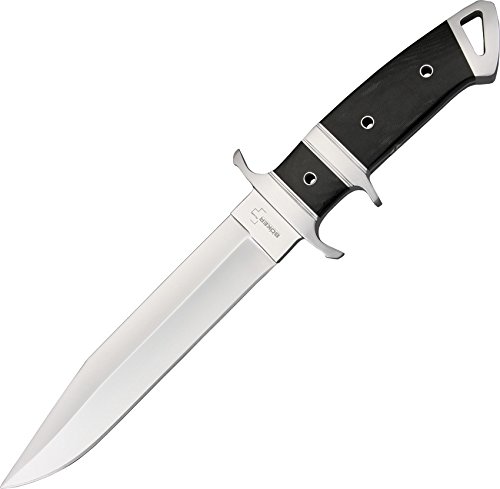 In the eras before firearm invention, daggers were used as the weapon of choice for assassinations. One such example is the assassination of Julias Caesar, who was stabbed twenty-three times by daggers. Daggers were also used in celebrations and festivals. Scottish dirk, a type of a dagger, brandished while performing a Scottish dance. This 18th-century ritualistic festival cannot be celebrated without a dagger.

There are various types of daggers used for differing purposes. Like some are used for hunting, and others, like a stiletto dagger, have a sole purpose, stabbing another person. A dagger’s length ranges from five to twelve inches long generally. A longer dagger is more decadent and used to inflict more damage to the opponent.

House Of Flying Daggers
Buy on Amazon
Bestseller No. 2

The Path of Daggers: Book...
Buy on Amazon
SaleBestseller No. 3

You will understand the difference in dagger and knife in a more detailed overview of the comparisons.

The first knife was made out of stone around two million years ago. The Stone Age served the same purpose as today – to ease our daily chores like cutting, cooking, hunting, etc. Several cave drawings verified the fact that the people used knives with them all the time.

Knives were used as a handy tool to survive, construct, and even a weapon. The resources and technology were scarce during those times. Knives were made of rock, flint, bone (human bone too!), and obsidian in the early times.

As metal-working begun in civilizations, iron and steel knives were manufactured with wooden handles. Dagger became one of the most popular weapons in history for injuring or attacking someone.

Early daggers can be traced back to Bronze Age at around 3BC. There have been hundreds of modifications over the centuries in their design and shape. Early daggers were crafted out of ivory, flint, or bone. Back then, they used to function as both tools and weapons.

As firearms became more popular, the dagger was mostly used in ceremonies and rituals. Egyptian Royalties used to craft their daggers using gold and ornaments. Mostly used by soldiers or warriors, they were American soldiers who preferred daggers during the Vietnam War.

Compared to knives, daggers are mainly designed for combat skills. With both edges extremely sharp, they inflict more damage when penetrated a victim’s body. The handle is usually made to be used comfortably with both hands.

Daggers are also known as small swords because you will see that the difference between a dagger and a sword is much less prominent. For example, the rapier sword is identical to a dagger with its sleek blade and intricate hilt. They are manufactured to be swift to ease thrusting or stabbing a person. The handle usually has a hilt to prevent self-injuries.

Although knives and daggers are often confused with being the same thing, a few design specifications make the former safe to use. A knife blade is sharp on one side and blunt and uniform on the other. The blades are not as thin as a dagger.

Knife-blades are wider at the base and a pointy but dull end. Even if you come across a double-bevel knife, you will notice that one side is still a bit dull from the other. The handle material varies from knife to knife, depending on the purpose.

Dagger is an unusual type of knife. It is fundamentally used for trial combat and self-protection. A more robust structure of the weapon is needed to withhold the forces of close-contact fighting.

It is evident by the double-edged blade that the purpose of a dagger is to inflict severe damage to the opponent or victim. Tactical daggers are smaller in size and light-weight. They can be used to attack your enemies at swift speeds and make quite a few stabs before they even realize they have been cut.

Knives have a wide variety of purposes. Some are used in hunting or camping. Others, like the Swiss Army Knife, have several distinguished blades for multiple purposes. They include a screwdriver, tweezers, scissors, bottle opener, file, and more.

The primary purpose of any knife is for cutting, slicing, or chopping. The majority of households have at least one knife for slicing vegetables or dressing meat. Pocket knives are used for cutting pages.

Hikers use a special knife to cut ropes. Any knife’s primary purpose is for household chores or to make human life more comfortable.

There are thousands of daggers from different periods to choose from.  A dagger can be chosen depending on its shape, size, and purpose. Seven kinds of daggers are noteworthy to mention. They come from various origins with differing histories and significance.

Trench dagger, the Cinquedea, Scottish Dirk, Jambiyas, and the Kalis are the most remarkable ones. They are different from each other by a variety of shapes and designs. For example, the Bollock dagger has two round hilts on the end of a wooden handle. The oval shapes are considered to be male testes or bottoms.

As to the type of daggers, there are also various kinds of knives available to choose from. The most common type of knives is kitchen knives. And within kitchen knives, there variations too. Some of them include the chef’s knife, bread knife, cleaver knife, utility knife, steak knife, carving knife, and boning knife.

Each of them is used for numerous purposes and is designed to work best for a particular use. A bread knife is long and serrated, whereas a butter-knife is smaller, blunt, and sleek. Depending on the purpose, knives have a sharp edge or a blunt edge.

If you consider dagger v/s knife, they have more or less the same blade length. Some knives are smaller in length to make lean cuts, while others are long or wide. The same can be said for daggers, but they do not have a wider blade under any circumstance.

For example, a pocket knife is shorter in size to fit inside a pocket. It is used to slice fruits or can be used as a weapon in case of self-defense. Wide-blade knives are used to chop thick bones or meats like pork. Fillet knives are thin and about 4-9 inches long, used to separate the meat from an animal’s skin.

Daggers can have longer blades. A longer blade causes more force to exert upon it and is easier to penetrated flesh. On the other hand, smaller and thinner blade daggers are more comfortable to conceal and brandish when needed.

As there are hundreds of different kinds of daggers and knives, the price also has an extensive range. Regular knives and daggers cost around $20-$40.

But as you buy them for a more specific purpose, the price tends to get higher. Moreover, the rate hugely depends on the material of the object.

A high-quality blade with a flexible handle may cost you more. But then again, quality is what matters! For example, John Gray’s custom Titanium blade hunting knife is over $1000 (like what?!). You may want to settle for a good quality knife with a mid-price range.

As the world is more inclined to bring peace than warfare, daggers have mostly become ceremonial. Combat is rare too and presumably illegal. So, daggers are not quite popular these days. But some people use it as a self-defense tool.

Also, some collect medieval daggers, which are so expensive. Many use ornamental-daggers as show-pieces for their living room.

More to the point, unless you are buying some expensive medieval daggers with Egyptian stones or gems, it will cost you around $20-$60.

Now that you have the basic knowledge of dagger vs. knife, you will not bring a weapon to your home if you do not intend to. A knife is used to carry out most household chores while you may have to dig a grave for using a dagger!

While it is not illegal to carry a dagger, it is wise to tell you that you will need a permit if it’s larger than 12 inches. A dagger over 12 inches almost resembles a sword. So, it is better to always store sharp objects away from the kids at home.

If you are thinking to buy some knives, do check out Amazon.com. They have the most extensive collection of knives, utility tools, self-defense weapons, knife accessories, and maintenance kits, etc., at the cheapest rate. You will find all kinds of knives, from cheapest to most expensive ones, with varying blade lengths.

PrevPreviousWhat are Deba Knives Used For- Types, Feature, and Maintenance
NextWhat’s the Differences between Boning knife vs Fillet Knife When Cutting?Next